Day 9 of the detox plan, I’ve been mostly good😜. It does get easier as the time goes by though. I’ve had a fascinating revelation in my sober days. When I wake up in the mornings without any hangover or lingering backdrop of the previous night’s consumption, it feels like my mind is so calm and so open to so much more new information than ever before. It feels so clear and crisp. I’m not sure I’m even making any sense but it’s an amazing feeling.

I think I’m going to stay off alcohol more often now. Maybe two or three times a week moving forward. Don’t get me wrong, it’s not like I drink a bottle of wine everyday or I go to bed drunk every night and wake up with a huge hangover every morning.

But it is about 2 glasses of white wine or 1 glass of red, most nights, which some might say is a bit much. It’s one glass when I get home to unwind, and another with dinner. I don’t think it’s excessive at all but I do want to have more alcohol free nights.

Oh and at least once a week I don’t drink anyway, because I have to work the night shift. On a serious note though, I do appreciate how alcohol addiction is no joke. People really get consumed and enslaved by this toxic drug that is so easily taken for granted every day. This is why I often do my detoxes to make sure I’m still drinking by choice, not because of compelling physical or psychological dependence and sometimes even social. You’d actually be amazed about how many people are socially dependant on alcohol, who are socially incapacitated without. I know Raj from ‘The Big Bang theory’, the series, is a bit extreme but a perfect example.

Alcoholism has become quite a big problem in South Africa in recent decades. Probably because of easy accessibility and poor monitoring of. You can clearly see the problem by the number of children walking around with the ‘ Fetal Alcohol syndrome’ faces. Not defending people who drink while pregnant but we do make good beers, wines and spirits in South Africa.

Anyway, enough about my drinking. I’m looking forward to dinner tonight. It’s DIY pizza. This is inspired by my son, who always wants to sit on the counter and watch mommy cook. And I want to involve him as much as possible in the cooking, you’re never too young to learn, right?

So tonight, I’ll be making the pizza dough, preparing the toppings of choice and everybody builds their own pizza with their toppings. It should be fun!

The pizza pastry recipe; you can check out on a prior post: Homemade pizza: ostrich Mexicana and ham/ mushroom and chorizo.

You can also check out a video: making pizza dough, to be uploaded on you tube under ‘ My precious kitchen’.

As for the toppings; your choice and whatever you have in your fridge. This is a nice way to clean up your fridge, of all the veggies and herbs that might go off soon. 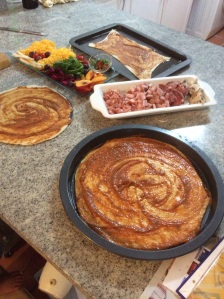 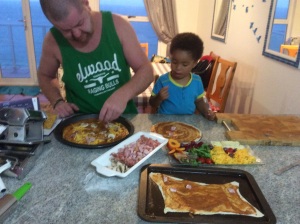 My pizza: I get to make two and in whatever shape I want! So I’m going for a rectangular shape and a triangle for my other pizza. First pizza is topped with mushrooms, ham, bacon, chili, tomatoes and sprinkles of Gouda cheese. The second being much more experimental with a play on sweet and savory; topped with slices of fresh nectarines, diced beetroot, ham, salami with Camembert cheese finished with fresh rocket and a drizzle of honey.

My son goes for his trusted ham and cheese. But most of the ham goes past the pizza and into his tummy. 😄

My husband is trying to recreate his favorite pizza these days, it’s hard to keep track, it keeps on changing. It was the Mexicana with mince, chili and peppers but now it’s not. He’s topping his with ham, salami, mushrooms, fresh red and green chili, cheddar cheese, tomato and finished with a few slices of Camembert cheese. The Camembert is him being experimental.

Into the oven at 230 degrees celsius for 15 minutes, then out and slice and Bon Appetito!

And it turned out so well. I’m not the biggest fan of pizza but mine was perfect. Nicely thin and crispy base, good balance of delicious flavours and I love my contemporary shapes!

Hubby and son are all complementary as well and polishing their plates nicely. I think dinner was successful, but I do have to work on my sweet and savory combinations.

I'm a multi-faceted young woman. I'm a proud mom to a now 8 year old 😜. I'm a daughter, I'm a sister and a friend to an amazing circle of powerful people ❤️ I'm a medical doctor, public health specialist currently in marketing I live food, from cooking to finding the best spots in town and in my travels for a good meal. Health, Fitness and Nutrition fanatic. I live by a few beliefs...: 1. Before I do anything whether related to food or not, I ask myself ' Is it worth the calories?' Whether literally or figuratively( i.e. Is the decision worth the stress, effort, investment) 2. What you put in must come out! If you don't let it out, it settles on your tummy and hips. 3. 'Everything happens for a reason'. I try reflect on situations I find myself in, whether by choice or not. And look for Lessons I'm meant to learn from them, in order to grow. View all posts by preciousgarnett

I'm a multi-faceted young woman.
I'm a proud mom to a now 4 year old. I'm a wife to my husband 😜. Daughter and older sister to 5 siblings.
I'm a doctor by profession, with passion in infectious diseases, public health and primary health care.

I'm passionate about health and nutrition. I foster and promote balance in everything I do and eat.